Fall Lecture Series – How to Teach Reading and Spelling 
… a screen reader
… a language translator
… a text magnifier
… a page simplifier
… a screen masking tool, and
… an audio recording tool
… learn how to use it here!

Jared Blank runs a marathon on a treadmill, fundraising for children with dyslexia because he’s been in their shoes.
See Video

PORTLAND, Ore. — If you got up this morning and went for a run, congratulations on the dedication.

If you ran a marathon, well that’s impressive.

But if you ran a marathon on a treadmill, right in the middle of the Oregon Convention Center, then your name is Jared Blank.

“Just getting out and moving is fun,” said Blank as his feet thumped in a constant beat.

Right around 9 a.m. Saturday, Jared got on the treadmill to run 26.2 miles, while raising money for children around the world with dyslexia.

“It’s not anything that affects intelligence, but if they start losing that confidence early, we’re in trouble, we’re going to lose them,” said Blank.

His run coincides with this weekend’s International Dyslexia Conference, in it’s 70th year. So, Jared set a high bar, racing towards a fundraising goal of $70,000.

Jared is over 11 miles into #TheGreatMarathonChallenge. Show your support with a donation at http://bit.ly/GMCIDA2019  and help raise money for children with dyslexia worldwide. 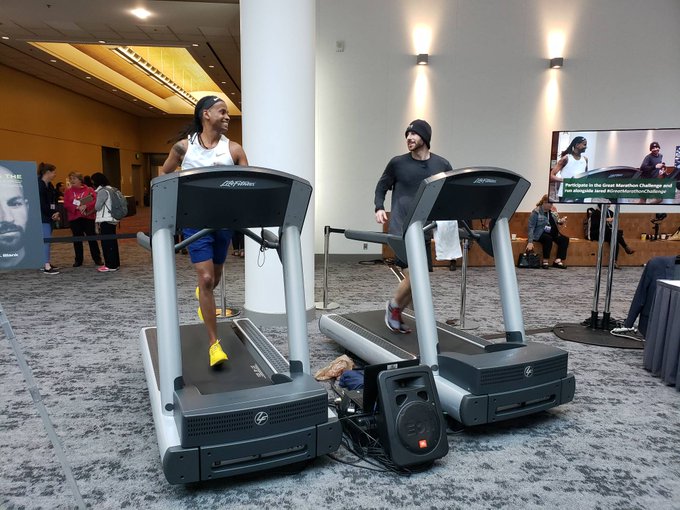 “I was fortunate to have support, but even with support, I know how hard it is.”

Jared himself has had dyslexia for most of his life. He was diagnosed when he was 5.

As a kid, running was his way to deal with the frustrations that came with school and life.

The Oregon native was told he probably wouldn’t graduate high school. But he did and then went on to get two degrees. So, his perspective definitely has legs.

“We think of just education as being in the classroom, but this is like bringing movement to the whole thing,” Jared said.

Jared finished his marathon in four hours and one minute and so far has raised over $2,000 towards his $70,000 goal.